Shahnaz Begum had thought of herself as just another resident of Mundwad Village who had lived with her now-retired army-man husband in various parts of India while he served the nation, and who would now live out the rest of her life in her village, hopefully in peace, and certainly in anonymity. But that was before CherYsh did a Skills Mapping exercise in her village and discovered, quite by chance, that she had expertise in ‘Khila Work’ – a tapestry technique using nail and board to weave strips and squares. A Class-10 educated woman, Shahnaz did not think of this as any kind of skill, just a little hobby to keep herself cheerfully engaged and to produce squares and rectangles using leftover wool.
It took a lot of persuading on the part of CherYsh to make her believe that she had a skill that could be used to her advantage, that she could go beyond using leftover yarn to make scrappy squares and weave smart and stylish shawls and stoles instead, and that she could engage with other women and train them in the same skill.
Starting with a small advance of Rs.10,000 /- as well as design, marketing and packaging inputs from CherYsh, today, Shahnaz has trained 20 women and more are waiting in line. She manages a small Khila Shawl Production Unit, shawls and stoles are being made to order, and her unit currently has an order of more than 100. The cost of each shawl is in the range of Rs.1000 – 1500/-, excluding courier charges. This is now one of the flagship projects of CherYsh Haliyal Karakushala Kendra, an attempt at promoting social entrepreneurship that will hopefully grow and flourish. 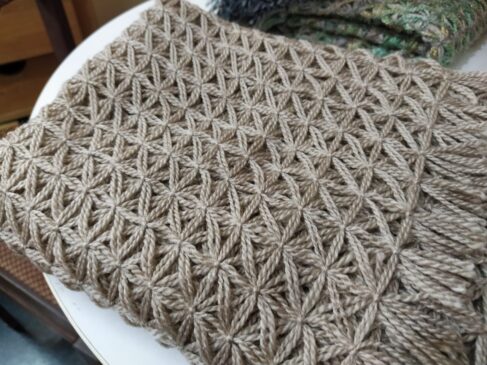 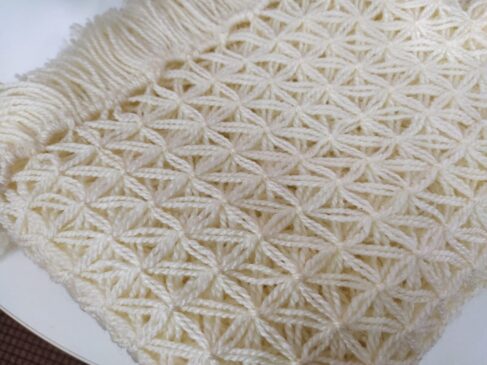 To place an order, enquire about prices, view other available colours, and support these women Whatsapp RENU MUKUNDA: +91 8277021705 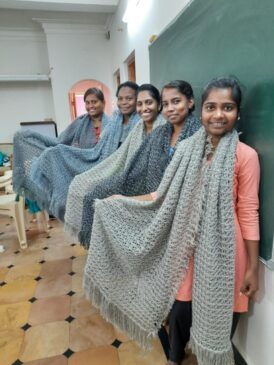