If you asked me what I thought I’d be doing during my first week in India, I can assure you the answer would not have been participating in the 5K Majja run or ‘fun’ run of the TCS World 10K marathon. Throughout the years I have taken up running periodically, but am incredibly out of practice right now. Regardless of my physical capabilities, I was excited for the opportunity to help fundraise and run for a good cause!
I woke up the day of the marathon on time, excited and as energetic as possible for 6 o’clock in the morning. Unfortunately, not everything goes as scheduled when you add Bangalore traffic with road blockages across the city. This meant I had an unintentional warm up running from where my uber dropped me off to the stadium. Already in a bit of a sweat, we got into the venue just seconds before the countdown commenced. Thousands of participants were packed into the stadium, and the energy was high as the countdown began. The build up to “3, 2, 1” was anticlimactic as we could barely move through the crowd. It was a slow start, but as we reached the stadium exit and went onto the streets of Bangalore, the crowds momentum picked up and we were off. Onlookers cheered and yelled motivational chants for us to run faster, and I was still skeptical I could, but began to run anyway.
I was pleasantly surprised with my abilities; stopping only for water breaks, and of course dance breaks at the DJ booths scattered throughout the route. However, this experience was more than a realization of my personal fitness level, it was my first introduction to the city of Bangalore. From passing the Vidhana Soudha, to the central library and through the lush greens of Cubbon Park, I was able to see many parts of what this city has to offer. Most of all, I felt a part of a big community as we all gathered together and ran for a cause. From the cheering onlookers, to the thousands of runners, in the moment we were all supporting each other. It is these experiences that enforce such an emphasis on the importance of community, and is what continues to build my passion for strengthening development on a community level. Fundraising and participating in the Majja run built up my excitement for the rest of my internship with CherYsh Trust, and I am looking forward to doing more for the communities in the Haliyal region. 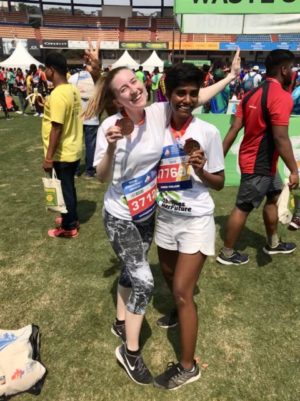 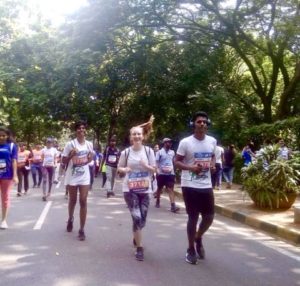